Are Grandparents missing out on NI credits? | Acumen

Time to talk about unused, unclaimed, often overlooked National Insurance credits again – this time it’s the snappily titled “Specified Adult Childcare Credits”. Our recent event at which Sir Steve Webb was one of the guest speakers highlighted the fact that only a handful of eligible people ever claim this benefit, which could make a significant difference to someone’s State Pension entitlement. 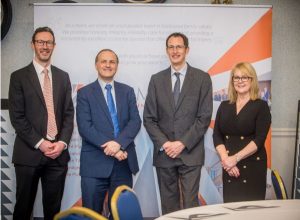 So the story here is that when a baby is born, the Government believe, quite rightly, that as far as State Pension credits is concerned, looking after children at home is as important a job as running a FTSE 100 company and should give you the exact same State Pension rights as the most highly paid CEOs in the country.
If you’re a mum (or a dad) at home, looking after your kids under the age of 12, you can claim NI credits, which are attached to Child Benefit, to keep up your entitlement to state pension whilst you’re not working in a formal job.

I’ve spoken before about how important it is for everyone to register for Child Benefit even if they don’t claim it (which might be the case if the household income is above £50,000) but what about cases where the parents/main carers actually go back to work and someone else in the family looks after the child – or children?

In these cases there is a National Insurance Credit just going begging.

Not a lot of people know that this Credit can be claimed by another family member (often grandparents but it could be brothers, sisters, aunts or uncles or other family members) as long as they are over 16,under State Pension Age and not already getting NI credits.

So how do you claim?

The parent needs to be entitled to claim Child Benefit but not be entitled to the Parent’s Credits ie because they have gone back to work and are paying NI themselves. They then need to fill out a form giving their own details and the child’s details and when they care for them. They give the personal details of the parent who is claiming Child Benefit and then they and the parent both sign the form . It can even be backdated! If there are 2 children and 2 eligible carers, then there can be two claims. It tops up State Pension and that can make a huge difference to someone, who for example, who has given up work themselves to look after their grandchildren and doesn’t have 35 years of NI credits to get the full state pension.

Here’s the link to make the claim: Application For Specified Adult Childcare Credits